Why I write Afrika with a K 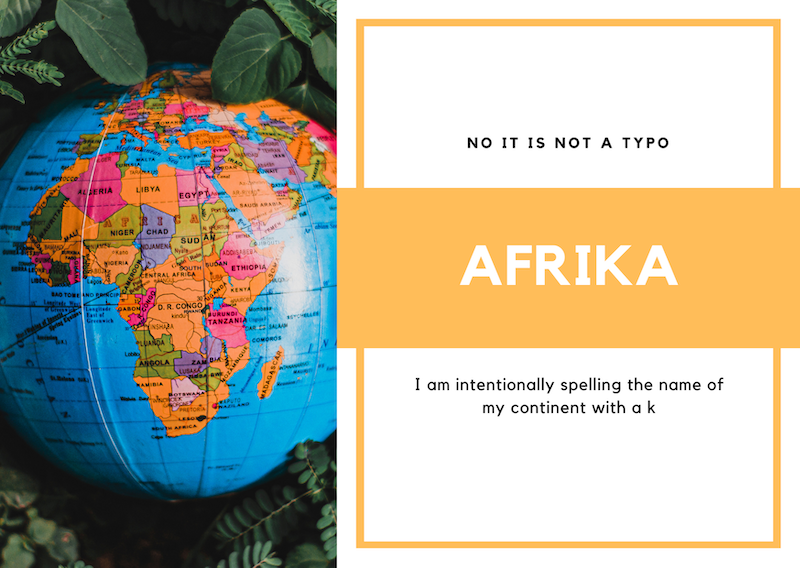 For the last ten years or more, I have been spelling Afrika with the letter K instead of the famous C. In school, my teachers insisted that my spelling was an error. Most of the time, I gave in, and a few times, I would put up a fight. Now in my professional life, the same thing happens. For example, when I submit a manuscript for publication, reviewers or editors incredulously comment that I have made a typo, which I must fix before publication. I often add a footnote to explain my reason, but I have also submitted without an explanation.

A quick search on the internet reveals that I am not alone in this practice. The reasons are many and varied. Some focus on the unity of Afrikans on the continent and in the diaspora, others argue for taking control of the language, I have even seen arguments that it is part of the black radical agenda (i.e. “Why do black supremacists often spell Africa with a k?” –  found that on a discussion board). I can’t speak to why others do it, and I have never advocated that everyone should use the K spelling. I just know why I spell it with a K and why I’ll continue.

My spelling of Afrika with a K is very simple. I am born in Namibia by Aawambo parents. My language is Oshiwambo. C is not a typical letter in our language. At this moment, I cannot think of one word that has such a letter. In fact, the letter C would make the equivalent of an S sound. I do not know of Namibian languages that use C in their words (I am not talking about words adopted into the language).; we have over nine different languages and a many dialects in a country of 2.5 million people. Even the colonial language Afrikaans is spelled with a K. I have also asked many of my friends from other Afrikan countries, and they have stated that the K is more natural to Afrikan languages than the C. I believe that the spelling with a C exists to make it fit European languages. So for me, I am choosing to write Afrika with a K because that is how it is in my vernacular, and I believe most Afrikan languages are similar in this way.

Now I know that this is not an academic argument supported by citations (I am working on that. Plus there are others who have articulated their spelling much better than I. See – Unlearning lessons of injustice: The conscious decision of spelling AfriKa with a “K”). I also know that I am inconsistent because I use other words that should equally be scrutinized. For that matter, there is the question of where the name Afrika (or Africa) came from, and some have said it may not even be the accurate way to refer to the continent. I believe this is the problem with what Prof Pascah Mungwini refers to a the colonial nomenclature. One person even pushed back when I shared my thoughts…“but really, should we scrutinize every word we use”…(Ummm…yes!). However, for me, it is more than that. It is not just about a C or K. It is about coming back to myself. There are still many things I do not know of myself as an Afrikan or many things that I know because someone else has told me. I continue to enter my home through a gate that someone else has made. I am finally at a stage where I have tools to start building my gate, and the letter K is just one brick in the construction process and questioning of colonial nomenclature.