On dignity and robbery during COVID

These days I am thinking a lot about dignity and robbery. The context of COVID19 worldwide, specifically the surge in Namibia, is forcing me to re-conceptualisation these seemingly simple words. Today I saw the picture of the burial of Professor Mburumba Kerina on the New Era Twitter account. The image in the screenshot below consists of individuals in white bodysuits; I assume they are health workers and in the middle is a figure in black, who I believe to be a pastor. Unfortunately, scenes like these are too familiar in Namibia and worldwide during these times of the corona pandemic. Some may throw up their hands and walk or scroll by, but Professor Kerina was not just another person, and neither is anyone else who has fallen victim to the disease. 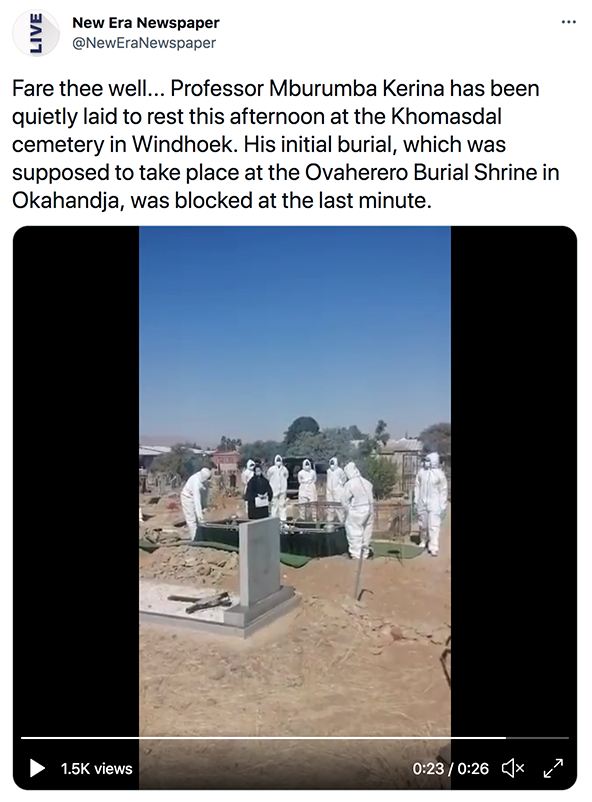 Professor Mburumba Kerina occupies a special place in world history. Not many people get to name a country and live in it. His biography is impressive; he was one of the earliest petitioners to the United Nations for Namibia’s independence. He was an academic and a politician who made significant contributions to his country and broadly to the end of colonisation in Afrika. The image of him being buried in such a fashion, as captured above, is sad; but too many of us can relate. In any country and at any other times, he would receive a hero’s send-off, surrounded by family and dignitaries telling his story.

From newspaper reports, he was denied burial at the Ovaherero Burial Shrine in Okahandja. It is unclear why he was not buried at the hero’s acre in Windhoek or how he ended up at the cemetery in Khomasdal. However, perhaps this is also his last contribution to the nation, to remind us of dignity and robbery brought about by corona. Maybe to give voice to so many others who have gone seemingly unnoticed, to speak on behalf of families that must watch from afar or through mediated means unable to take part in the last goodbye.

COVID19 is forcing us to rethink what it means to die and be buried with dignity. What happened to Professor Kerina continues to happen to so many Namibians and many around the world. The dying are robbed of dignity in their last moments and for their burials. Those left behind are robbed of mourning with dignity, of being able to comfort each other and celebrate the life of their loved ones. Amongst the images that loved ones are left with, if they are lucky, are of individuals in white outfits performing a service. The robbery is not only limited to death but also extends to life events such as births, birthdays, weddings, visits, hugs, and many ordinary activities crucial to being human. The concern I have is how long will this go on until it becomes routine. How long can we take the robbery? How can we remain dignified and retain our dignity amidst this onslaught on our humanity?